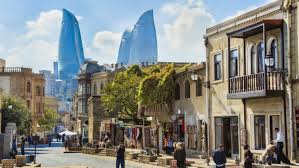 Azerbaijan is the first democratic republic of the parliamentary model that gave the right to women to elect and to be elected within the whole oriental world in 1918. Azerbaijan is a country in the Transcaucasia region, situated at the crossroads of Southwest Asia and Southeastern Europe. It is bound by the Caspian Sea to the east, Russia to the north, Georgia to the northwest, Armenia to the west and Iran to the south.
Three physical features dominate Azerbaijan:
– the Caspian Sea, whose shoreline forms a natural boundary to the east;
– the Greater Caucasus mountain which range to the north;
– the extensive flatlands at the country’s centre.There are also three mountain ranges, the Greater and Lesser Caucasus, and the Talish Mountains, together covering approximately 40 percent of the country. The highest peak of Azerbaijan is mount Bazardüzü (4,466 m), while the lowest point lies in the Caspian Sea (−28 m). Nearly half of all the mud volcanoes on Earth are concentrated in Azerbaijan, these volcanoes were also among nominees for the NewWonders of Nature. The modern Republic of Azerbaijan proclaimed its independence on August 30, 1991, prior to the official dissolution of the USSR in December 1991. The Constitution of Azerbaijan does not declare an official religion and all major political forces in the country are secularist.Azerbaijan has gained fame around the world with its natural sources, national cuisine and with citizens’ hospitable nature. Our main national dish is “Shah Plov”, which is made from rice and lamb meat.
Some facts about Azerbaijan: